Belief is a strange thing. Belief conjures up real things from the ethers...

Belief brings forth monsters. And angels, too.

Let me start by saying that I know that this does happen... however, it is in large part due to the hysteria and mass false propagation of the ill-informed; not because the theory works.

Everyone you know will tell you that dog fighters steal and use 'bait dogs' to train their dogs to be more aggressive and to be better fighters.  I am here to tell you - that this is utter bullshit, and this theory does not hold water.

We don't claim to be 'experts' - as some like to say that we do.  However, we do know dogs - specifically pit bull dogs - and we do have over 50 years combined hands-on experience with close to 500 dogs of this breed.  It is our belief that there are no 'experts'; as you can always learn something new...  as long as your mind is open.

That being said, when I met my husband, I had never even heard of a American Pit Bull Terrier (pit bull); much less ever seen one.  I immediately fell in love with the breed.  While it is true that our first 15 years involved in the dogs was breeding them, we did breed for the right reasons.  We have almost every book that has ever been written about the breed, even the ones glorifying the fighting dogs.  We not only have the books, but we have both read them from cover to cover, many times.  When we bred dogs, we gave a copy of one of the most informative books to new owners.  We feel that one should know everything they can possibly know about the breed of dog (horse, cat, whatever) they are going to own, preferably before owning one.  Sugar-coating the bad parts (fighting in this case) - isn't going to help you, or especially not the dog.

Pit bulls were bred to fight.  They enjoy fighting more than anything on this earth.  It is much like a Lab and duck hunting; or terriers being squirrel dogs... it's bred into them.  Before I go any further, let me point out that ALL DOGS fight.  Of course, not with the intensity that pit bulls do - but they do fight. Unfortunately, most people think it's 'cute' when little dogs fight.  And those same people most likely don't discipline their dogs for doing so... or think it's cute when a little dog is aggressive towards a person (taking a bone away, getting after their spouse when trying to be close, etc..)  It's not cute.

But it can be controlled. As with most any behavioral issues.  You just have to have the right authority and basically, not take any shit... lol  If you can't control the situation, then you don't need any dog - much less a pit bull.  The irony here is that we have two dogs in our rescue that were from our last breeding.  And those very two dogs are the ones that we use to help train the dog-aggressive dogs how to be dogs again.  They are extremely calm, quiet, happy-go-lucky dogs and do not pick fights with anyone - even when the fight gets picked for them.  Why, you might ask? Because the other dogs in the rescue are NO THREAT to them.

You see, true fighting dogs do not see a threat in most other breeds of dogs, at all.  They don't feel the need to bluff (which is 90% of what most other breeds do in a fight - growling, snarling, snapping the air, hair standing up on their necks and back).  Think about this as it relates to people... Let's take a UFC fighter.  You don't see them walking around, puffed out, yelling about what a great fighter they are and they can whip some punks ass, blah blah blah.  Why? Because there is no need.  How many of the puffy trash-talking people that you know can actually back up what they say?  None?  Exactly.  Those that talk the most 'shit' have the most to prove.  If you are confident in yourselves, there's no need for braggadocio...

It's the same with the true pit dogs.  Again - most of what you see these days are not the true pit bull dogs (will cover this more later).  Most of the dogs being deemed pit bulls these days are in fact more bullys (and bullies).  The bullys have been bred to Mastiff's (Neopolitan and Bull), American Bulldogs, Great Danes, Cane Corso's, the list goes on...  In any case, the 'fighting' blood has been watered down in favor of size.  Still, the same principle is true.

What, exactly, would a UFC fighter gain by running to the closest pre-school, waiting for recess, and beating up the kids on the playground?  Absolutely nothing.  So, then, why would you think any dog, other than a pit bull, would do anything in the way of 'training' a dog to fight?  It would do absolutely nothing...And before you get on the 'taste of blood' bandwagon, let me call BULLSHIT.  Are you running around killing cows in the field and devouring them?  But, you eat meat!!  I like my steaks medium rare - and I have yet felt the urge to butcher a cow when passing them on the highway...

As for a little history... back in the day when dog fighting was done by responsible people (not saying it's right - just giving some historical facts), dogs were only matched (fought) if they showed an extreme interest in fighting.  No dogs were made to fight - just like you wouldn't make your kid play a sport they don't want to play, or an instrument they have no interest in.... they wouldn't give it 100%.  The dogs that would rather fight than breathe were then 'rolled' (test fight) with another, bigger, more experienced dog.  Again, as with people, giving them false confidence would not help one bit.  Therefore, more experienced dogs were used to determine if the possible fighter had potential. Many times the potential dog would be 'rolled' several times before it was determined that he would be used as a fighting dog.  The dog was then conditioned (exercised) to their optimal weight and a match sought out with a dog that same weight (within a few pounds - not this BS they are perpetrating today).

One very important thing I feel the need to point out at this time is that fighting dogs were held to a much higher standard than most breeds of dogs these days in that any people-aggressive dogs were immediately culled (killed) - and thus their undesirable traits were not allowed to continue on in future breedings. Only the best of the best were bred, which is why - atleast up until everybody thought they could breed a better dog - pit bull dogs were the most stable of any breed, ever.  And, again ironically, the true fighting bloodlines are the best, most stable of the pit bulldog lines - for the very fact of the strict guidelines dog fighters adhered to.

To finish the fighting history - dogs were matched to weight; they were allowed to fight until one turned its head or acted like it did not want to fight any longer. They were then allowed to 'scratch', which meant that the dog that 'turned' was given the opportunity to cross a line in the corner, which would determine whether or not he wanted to continue the fight.  If he did not - the fight was over.  If he did - then they were again separated at the next 'turn' and the other dog was given the chance to quit or continue.  This went on for as long as the dogs would 'scratch'.  If a dog decided he was done, the fight was over.  Take note that the 'handlers' and referee of the match were in the 'pit' with the dogs at all times, handling the dogs in the middle of a 'pit fight' - and that any dog that was people-aggressive was highly undesirable under these circumstances.

While I do not condone dog fighting - please understand that, if nothing else - it is because of the strict breeding of the fighting dog bloodlines that we have the bullet-proof, loyal, goofy, stable, loving dogs we have today.  Yes, they can beat nearly any other dog in a fight - but as I said before, all dogs fight... And again, pit bulls very often do not start the fights, but they most assuredly can finish them.  The key is to stop anything before it begins.  I bet if I put you in a room with even your best friend, after about 2 weeks of constant one-on-one, you'd probably be at each others throats, too, especially if you couldn't convey that to anyone that may could help...  Just think about it.

And think about what in the hell beating up a cat, puppy, rabbit, or any other breed of dog would do for a pit bull.  Unfortunately, even if another animal was used as 'bait' for a fighting dog - they are fighting dogs, so most likely it would not survive, so you really wouldn't see many 'bait' animals.  I'm not saying the 'bait' animals haven't been in a fight - I'm sure they have.  I'm just saying that it mostly likely wasn't because of a dog fighting ring - because (a) - it probably wouldn't survive; and (b) if it was - it's only because of the hype glorifying and surrounding the 'bait dog' theory which only fuels the fire on the idiot low-lifes that are fighting dogs these days and they think it's what they are supposed to do.

Every post, share, comment, news story, article, etc. talking about 'bait dogs' only gets the false information out to the wrong people that think it's how things should be done, and instead of helping the issue, it is inflicting it.  Just, please, think about that.  Don't be a sheeple.... instead of sharing the ignorance, educate. Educate that the theory does NOT HOLD WATER and there is absolutely no need to 'train' a dog to fight (at all, of course) but especially not by using any other animal as bait. 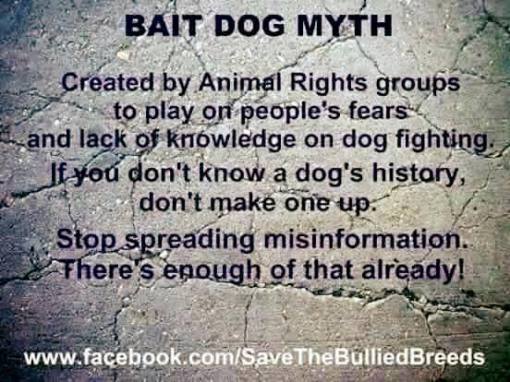