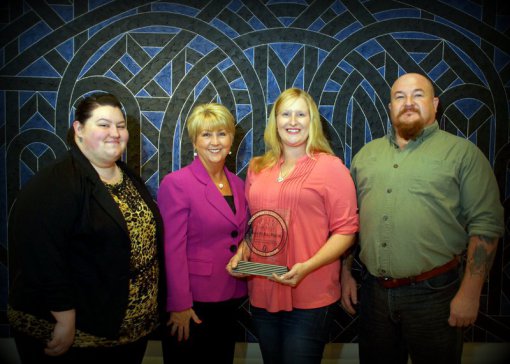 When nominations opened for the 2014 Governor's Initiative for Volunteer Excellence -- or GIVE -- Awards earlier this year, Leslie Peel, director of the United Way Volunteer Columbus, was eager to seek recognition for some of the many "doers" in Lowndes County.

GIVE was established through the Office of the Governor and Volunteer Mississippi to recognize individuals and organizations that have made an impact through service, advocacy and outreach. In a ceremony April 14 at the Mississippi Museum of Art in Jackson, Judie Granderson Holmes earned the Outstanding Service to Veterans and Military Families, and Shaw Pit Bull Rescue (Shaw PBR) won the Outstanding Achievement by a Grassroots Volunteer Initiative.

Roberta Weeks earned a distinguished honorable mention for making a significant impact on school improvement efforts in the Lowndes County School District. Peel said, "I feel it's important that volunteers in our community who have done an outstanding job are recognized. Sometimes their efforts aren't necessarily out there for everyone to see, but they are doing good work."

When Judie Holmes' son, Richard E. Holmes II, 28, lost his life to an overdose, Judie and her husband were determined to try to help other veterans from suffering similar fates. Eight years of military service, a divorce and the death of his own child took a toll on Richard; he struggled with an addiction. After four months in a substance abuse rehabilitation program, he seemed to be improving. Unexpectedly, he took his own life.

The Holmes believe their son may have lived if more resources to help veterans reintegrate into civilian life had been available. They founded the Richard E. Holmes Memorial Foundation and committed to addressing mental, physical and emotional needs of veterans. Judie pushed to establish the Memorial Day Walk/Run for Veterans' Causes in Columbus. She also frequently volunteers with Loaves and Fishes Soup Kitchen, United Way, Boys and Girls Club, Veterans Heath Fair and other organizations.

Since the summer of 2012, Shaw Pit Bull Rescue has found homes for 100 dogs, operating under the motto "American Pit Bull Terriers: love them, or leave them alone."

Kenneth and Aimee Shaw founded the grassroots organization with the intention of saving one or two dogs at a time. They quickly realized the need was larger than the two of them. Shaw PBR's "PitCrew" now has Lesley Bailey as a third partner, a board of directors and loyal volunteers. The collective goal is to seek to foster responsible pit bull ownership through a low-cost veterinary spay/neuter program, education, adoption and breed advocacy.

Jan Swoope is the Lifestyles Editor for The Commercial Dispatch.