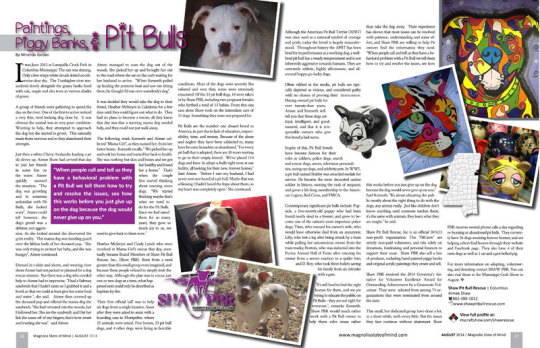 It was June 2012 at Luxapalila Creek Park in Columbus Mississippi. The sun was shining. Only a few wispy white clouds dotted an otherwise clear sky. The Tombigbee river meandered slowly alongside the grassy banks lined with oak, maple and elm trees in various shades of green.

A group of friends were gathering to spend the day on the river. One of the first to arrive noticed a very thin, tired looking dog close by. It was obvious the animal was in very poor condition. Wanting to help, they attempted to approach the dog but she started to growl. This naturally made them nervous and so they abandoned their attempts.

Just then a white Chevy Avalanche hauling a jet ski drove up. Aimee Shaw had arrived that day to join her friends in some fun on the water. Aimee quickly assessed the situation. "The dog was growling and to someone unfamiliar with Pit Bulls, she looked scary."  Aimee could tell however, the dog's growl was a defense, not aggression. As she looked around she discovered the grim reality. This mama dog was standing guard over the lifeless body of her deceased pup. "She was only trying to protect her baby, and she was hungry," Aimee continued.

Dressed in t-shirt and shorts, and wearing river shoes, Aimee had not packed or planned for a dog rescue mission. But there was a dog who needed help so Aimee had to improvise. "I had a Subway sandwich that I hadn't eaten so I grabbed it and a bowl, so that we could at least give her some food and water," she said. Aimee then covered up the deceased pup and offered the mama dog the sandwich. "She had retreated into the woods, but I followed her. She ate the sandwich and I let her lick the sauce off of my fingers; that's how sweet and trusting she was," said Aimee.

Aimee managed to coax the dog out of the woods. She picked her up and brought her out to the road where she sat on the curb waiting for her husband to arrive. "When Kenneth pulled up hauling the pontoon boat and saw me sitting there, he thought I'd run over somebody's dog".

It was decided they would take the dog to their friend, Heather McIntyre in Caledonia for a few days until they could figure out what to do. They had no plans to become a rescue, all they knew that day was that a starving mama dog needed help, and they could not just walk away.

The following week Kenneth and Aimee collected "Mama Girl", as they named her, from her foster home. Kenneth recalls, "We picked her up and took her home and nursed her back to health. She was nothing but skin and bones and we got her healthy and found her a home."  That's when the couple first started thinking about rescuing more dogs. "We started thinking maybe that's what we need to do for the Pit Bulls. Since we had raised them for so many years, they gave so much joy to us, we need to give back to them now."

"When people call and tell us they have a behavioral problem

with a Pit Bull, we tell them how to try and resolve the issues,

because the dog would never give up on you."

Heather McIntyre and Cindy Lynch, who were involved in Mama Girl's rescue that day, eventually became Board Members of Shaw Pit Bull Rescue, Inc., (Shaw PBR). Born from a need greater than this small group even imagined, and because these people refused to simply look the other way. Although the plan was to rescue just one or two dogs at a time, what happened next could only be described as baptism by fire.

Their first official 'call' was to help six dogs from a single location. Soon after they were asked to assist with a hoarding case in Montpelier, where 32 animals were seized. Five horses, 23 pit bull dogs, and 4 other dogs were living in horrible
conditions. Most of the dogs were severely flea infested and very thin; some were extremely emaciated. Of the 23 pit bull dogs, 18 were taken in by Shaw PBR, including two pregnant females who birthed a total of 13 babies. From this one case alone Shaw took on the immediate care of 31 dogs. Something they were not prepared for.

Pit Bulls are the number one abused breed in America, in part due to lack of education, responsibility, time, and money. Because of the abuse and neglect they have been subjected to, many have become homeless or abandoned. "For every pit bull that is adopted, there are 20 more waiting to go in their empty kennel. We've placed 114 dogs and have 36 adopt-a-bulls right now at our facility, all looking for their new, forever homes," said Aimee. "Before I met my husband, I had never seen nor heard of a pit bull. Maybe that was a blessing: I hadn't heard the hype about them, so my heart was completely open." She continued.

Although the American Pit Bull Terrier (APBT) was once used as a national symbol of courage and pride, today the breed is largely misunderstood. Throughout history the APBT has been bred for its performance as a working dog; a well-bred pit bull has a steady temperament and is not inherently aggressive towards humans. They are extremely athletic, highly affectionate, and all-around happy-go-lucky dogs.

Often vilified in the media, pit bulls are typically depicted as vicious, and considered guilty with no chance of proving their innocence. Having owned pit bulls for over twenty-four years, Aimee and Kenneth will tell you that these dogs are loyal, intelligent, and good-natured, and that it is irresponsible owners who give this breed a bad name.

In spite of this, Pit Bull breeds have become famous for their roles as soldiers, police dogs, search and rescue dogs, actors, television personalities, seeing eye dogs, and celebrity pets. In WWI, a pit bull named Stubby was awarded medals for service. He became the most decorated canine soldier in history, earning the rank of sergeant; and given a life-long membership to the Ameri-can Legion, Red Cross, and YMCA.

Contemporary significant pit bulls include: Popsicle, a five-month-old puppy who had been found nearly dead in a freezer, and grew to become one of the nation's most important police dogs; Titan, who rescued his owner's wife, who would have otherwise died from an aneurysm; Lilly, who lost a leg after being struck by a train while pulling her unconscious owner from the train tracks; Norton, who was inducted into the Purina Animal Hall of Fame after rescuing his owner from a severe reaction to a spider bite; and D-Boy, who took three bullets saving his family from an intruder with a gun.

"It's still hard to find the right homes for them, and we are trying to educate the public on Pit Bulls - they are not right for everyone," remarks Kenneth. Shaw PBR would much rather work with a Pit Bull owner to help them solve issues rather than take the dog away. Their experience has shown that most issues can be resolved with patience, understanding and some effort, and Shaw PBR are willing to help Pit owners find the information they need. "When people call and tell us they have a behavioral problem with a Pit Bull we tell them how to try and resolve the issues, see how this works before you just give up on the dog because the dog would never give up on you," said Kenneth. "It's about educating the public mostly about the right thing to do with the dogs, any animal really. Just like children don't know anything until someone teaches them, it's the same with animals, they learn what they are taught," he said.

Shaw Pit Bull Rescue, Inc is an official 501(c)3 non-profit organization. The "PitCrew" are strictly non-paid volunteers, and rely solely on donations, fundraising and personal finances to support their cause. Shaw PBR also sell a line of products, including hand painted piggy banks and original acrylic paintings they create and sell.

Shaw PBR received the 2014 Governor's Initiative for Volunteer Excellence Award for Outstanding Achievement by a Grassroots Volunteer. They were selected from among 75 organizations that were nominated from around the state.

This small, but dedicated group have done a lot, in a short while, with every little. But the issues they face continue without abatement. Shaw PBR receives several phone calls a day regarding re-homing or abandoned pit bulls. They currently have 36 dogs awaiting forever homes; and are helping others find homes through their website and Facebook page. They also have 4 of their own dogs as well as 1 cat and a pot bellied pig.

For more information on adopting, volunteering, and donating contact SHAW PBR You can also visit them at the Mississippi Craft Show in August.