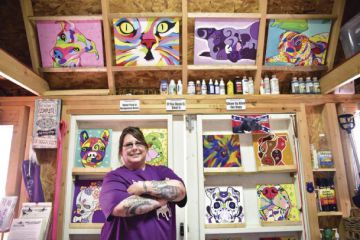 Aimee Shaw, who along with her husband operates Shaw Pit Bull Rescue Center in New Hope, stands in front of paintings she made that are displayed at the center. Shaw sells the paintings. The proceeds help fund the dog rescue, she said. Photo by: Luisa Por

Artist Aimee Shaw and her husband run the Shaw Pit Bull Rescue Center from their home in New Hope. It's not an easy job, but strange as it may sound, painting helps.

The couple currently has 26 dogs at the center, though they have had up to three times that many. They also focus on breed advocacy and work with people who have pit bulls, answering questions, doling out advice.

Shaw also works a separate full-time job. Add that to her own four dogs, cat and pot-bellied pig and Shaw's life can be pretty hectic.

That all goes away when Shaw sits down to paint.

"I'm so focused on the painting that I don't have room for anything else to stress me out," she said.

Her paintings, which help fund the rescue center and burst with vivid color, surround the space in her office. Many are of pit bulls, but Shaw has also brought color to cats, lions, birds and other breeds of dogs.

Shaw has tried painting dogs with natural coloring and never likes how those paintings turn out.

"It just doesn't look right to me," she said.

Shaw started painting piggy banks when she opened the rescue center three years ago. She needed a way to fund its growing population of pit bulls.

After about a year and a half of painting piggy banks, she began making paintings of the animal at the rescue center's heart.

"People wanted to buy them and it helps the rescue," Shaw said. "And it's a big stress reliever."

When she first began painting pit bulls and other animals on canvases, she traced many of the outlines before painting them. She still gets outlines from photos she has taken of the dogs at the rescue or of photos found online. She even does customized paintings for people who provide photos of their pets and tell her what colors they want in the paintings. 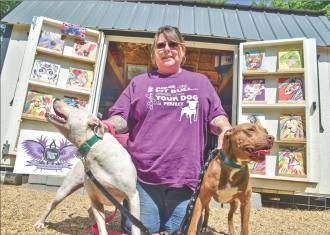 Aimee Shaw, who along with her husband operates Shaw Pit Bull Rescue Center in New Hope, stands in front of paintings she made that are displayed at the center. Shaw sells the paintings. The proceeds help fund the dog rescue, she said.

Shaw loves painting, but her art also serves the practical purpose of providing funding for the rescue center.

The Shaws are not currently taking in any dogs, but the dogs they have now have often come from homes where they were abused or where they were used as fighting dogs. Shaw and her husband look for homes for the adoptable dogs, retrain the dogs who have become used to fighting, and use the center to educate the public on pit bulls.

A lot of bad press about pit bulls comes from pit bull mixes who were bred by irresponsible owners breeding for looks alone, she said. Many of those dogs have health issues. Shaw and her husband have 50 years of experience with pit bulls between them and have had or been around close to 500 of the dogs. They've only been bitten three times.

"It's not the dogs," Shaw said. "It's what humans have done with them."

The paintings in Shaw's office show feisty, curious dogs -- dogs with one ear perked up or dogs tilting their heads. None of them depict a dog who looks anything other than friendly and happy.

The paintings go for between $25 to $60, depending on the size. Shaw's biggest sales come from events like Market Street Festival and other crafts fairs.

"If it wasn't for the art ... we wouldn't be able to do what we're doing because it's basically what's funding us," Shaw said.