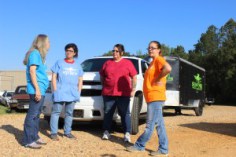 ABERDEEN – Nearly 14 months ago, Columbus-based Shaw Pit Bull Rescue assisted the county in rescuing 14 pit bulls seized by the Monroe County Sheriff’s Office. The rescue group picked up seven pit bulls April 21 that were seized by the MCSO earlier this month. The dogs will be socialized and rehabilitated.

“It starts with getting the dogs acclimated and letting them know you trust them. It takes a month or two of relaxing time as we learn their temperament. They just need some time to decompress,” said Dana McDonald of Shaw Pit Bull Rescue.

The rescue still has five of the pit bulls it took in from last year’s bust waiting on forever homes.

“With this many coming in at once, it overwhelms our kennel system. With Shaw being able to step up and take them, it buys time for the other dogs,” said Save-A-Paw Volunteer Lisa Wise, who added inmates from the work center have helped to socialize the dogs.

All in all, 14 adult pit bulls and two puppies were seized in the latest raid. The two puppies have since been moved to a rescue in the northern states.

Shaw Pit Bull Rescue is currently expanding its facilities from one acre to six and a half with the estimated cost of $65,000. Funding and donations are needed for the improvements, which will include a community dog park for large and small dogs and a dog walking track around the entire park