Pits and pigs: An animal rescue looks to make a move, launches campaign 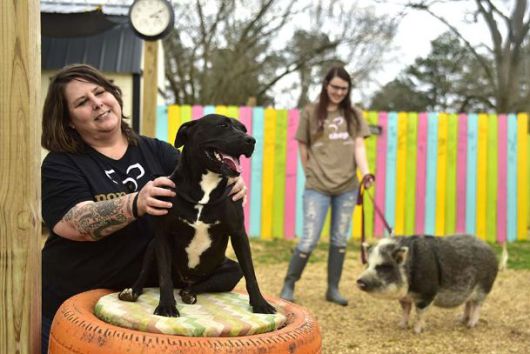 Aimee Shaw, left, gives Bella a good scratch Tuesday at Shaw Pit Bull Rescue in the New Hope community. The dog, now almost 2 years old, has been there since she was about 10 months old. At right, Alex Romans walks Gordy, a potbellied pig, on leash. The r

That's the best way I can describe it."

Dalton stood up on his hind legs, the tip of his wet nose happily pressed through the welded wire mesh of his dog kennel at Shaw Pit Bull Rescue, the better to greet visitors. Scars on his sandy-colored face and head have healed about as much as they're going to. Dalton got lucky. He was among 14 pit bulls seized in a Monroe County dog fighting ring arrest in 2016. Some of the animals were found chained to trees and near starvation. But if dogs can be said to smile, Dalton is doing it these days. He has his own digs, square meals, health care, raised bed, an enclosed cubby when he needs privacy and neighbors around when he doesn't. It's a big upgrade on the old life. Somehow, he seems to know it.

Dalton isn't alone. Right now, there are 23 dogs at Shaw Pit Bull Rescue (Shaw PBR) in Lowndes County's New Hope community. A stroll down the kennel rows brings each animal front and center, eager for a scratch on the forehead. The nonprofit rescue, with 501(c)(3) status, is run completely by volunteer effort. Founders and owners Kenneth and Aimee Shaw each have full-time jobs. Kenneth has been with APAC for 27 years. Aimee is office manager for an electrical contractor. Most every other waking moment is dedicated to the dogs.

The rescue is at capacity. There are many more animals that need help but there is no room to take them in. Kenneth and Aimee have a vision for changing that.

The Shaws have launched the long process of preparing to move from the approximate one acre their home and the rescue occupy now to a much larger six and one-half acre property not far away. Kenneth and his wife of 28 years want to expand the rescue's mission to save abused, abandoned or neglected pit bulls -- and add a sanctuary for potbellied pigs.

But first, the dogs.

"I never even knew what a pit bull was when I first met Kenneth," said Aimee. Kenneth had grown up with the breed from the age of about 12, and Aimee soon fell in love with them. They began Shaw PBR in 2012 to provide medical, physical and emotional care to homeless pit bulls and hopefully place them in responsible homes. They thought they would start out taking in one or two dogs at a time. The need proved much greater.

"We just didn't realize how big it would get," said Aimee, looking out at the kennels filled with adopt-a-bulls, as they call the dogs.

In the month of February alone, the rescue fielded 40 owner-surrender calls, received 19 calls about strays, received 25 transfer requests from other shelters or rescues, and took 23 welfare calls from people concerned about dog treatment. They also took in a blind, abandoned pit bull they named Stevie. A veterinarian's opinion is that Stevie's blindness appears fairly recent, perhaps caused by a trauma such as falling out of a truck.

"These are the dogs we want to help, the ones that really need us," said Aimee. Which is why the rescue held its first volunteer workday Feb. 11 at the new property. Seventeen energetic helpers cut and cleared brush and cleaned fence lines.

"We had an awesome crew come out," said Kenneth. "We got a lot done in a short period of time."

Extensive planning has gone into the new Shaw Pit Bull Rescue and Porkchop's Phat Farm (for potbellied pigs). Long-term goals are to purchase two covered carports with doggie doors so the adopt-a-bulls can have an indoor section as well as an outdoor run to enjoy sun and fresh air. Fenced play areas will include an agility yard and a socialization testing yard. A covered area with bench seating will serve double duty as a place for meetings, orientations and education seminars. (Education on responsible pet ownership is a continuing mission.)

The Shaws plan a 12-foot walking track on the outer perimeter of the property so volunteers can walk dogs. They even hope to eventually add a dog park for the public, with picnic tables.

And then, the pigs

Porkchop's Phat Farm is named in honor of the Shaws' miniature potbellied pig they acquired as a wee thing, thinking he would grow to 15 or 20 pounds. Kenneth estimates he now tips the scales at about 250. Which is one reason more and more phone calls are coming in to animal shelters that aren't equipped to handle pigs. It is estimated that about 90 percent of pet pigs end up being surrounded to shelters and sanctuaries in the first two years. With proper care and training, potbellies can be interesting, smart and beloved additions to a home, but many people who start out with a cute little pig discover they can be demanding pets that don't remain "little." 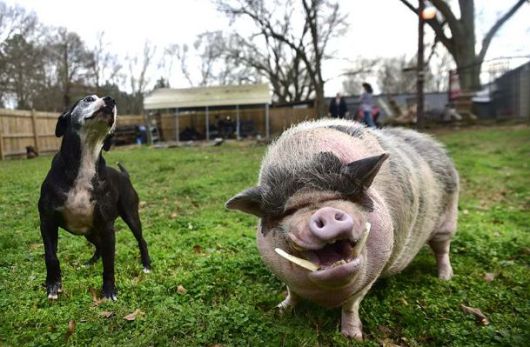 Porkchop is the Shaws' miniature potbellied pig, who didn't stay miniature for very long. Porkchop, pictured Tuesday with one of the Shaws' family dogs, lends his name to the proposed pig rescue. Photo by: Luisa Porter/Dispatch Staff

In January, Shaw PBR kicked off a New Site Campaign, with a goal of raising $50,000 by year's end. Detailed needs have been outlined for phases one through five of the proposed project, even down to the number of fence boards and nails needed. A Monthly Sanctuary Support Challenge hopes to sign up at least 100 supporters committed to regularly donating a selected amount.

Rescue finances are transparent; monthly financial statements are posted at shawpitbullrescue.com, under the link "Where is the Money Going?" Annual financial reports are also accessible on the website.

Dana McDonald is a go-to Shaw PBR volunteer, part of the essential army that assists in the mission. She helps with kennel upkeep and behavior assessment and training, as well as coordinating other volunteers, adoptions and fundraising events. Her family owned a pit bull when she was a teen, but what really brought her in was an incident that starkly illustrated to her how embedded negative preconceptions about the dog breed can be. She didn't want her children to grow up that way.

"We came and visited, and we never left," said McDonald, who is at the facility every Tuesday, Thursday and Saturday when it opens for volunteer days. Her kids -- 10, 11 and 15 -- are often with her.

"It's all about the learning for them that really got me involved, teaching my kids that there's so much more out there than video games and TV," she said. "It's about responsibility and compassion. If you have compassion for animals, you can have compassion for people."

Even though it will probably be a year or more before the larger site is ready for the move, McDonald realizes more space and more animals will no doubt need more volunteers. She urges new enthusiasts to join the ranks.

Kenneth echoed the appeal. "We want to give people a hands-on experience. The more people are involved, the more they are feeling a part of it."

The goals are big ones. Every dime and each volunteer hour donated will bring them closer. Contributions are crucial, of course, but the Shaws also ask for help of another kind.

"While God has opened up a door for us to make this a possibility, the exciting part is that others will be able to share in this project in several ways," said Aimee. "You can help pray for us as we take on this task."

It will take many hands and hearts.

"There's no such thing," McDonald said, "as a one-man team."

Jan Swoope is the Lifestyles Editor for The Commercial Dispatch.

View This Article at CDispatch.com