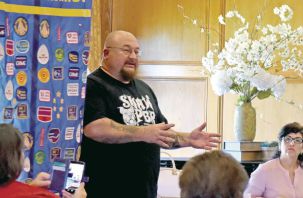 There has likely never been a breed of dog more maligned than the American pit bull terrier, which is widely considered to be an aggressive, unpredictable and dangerous dog.

Yet the characteristics of the breed, as defined by the United Kennel Club, paint a far different portrait.

According the UKC's description, the purebred pit bull "is eager to please and brimming over with enthusiasm. APBTs make excellent family companions and have always been noted for their love of children. ...The APBT is not the best choice for a guard dog since they are extremely friendly, even with strangers. Aggressive behavior toward humans is uncharacteristic of the breed and highly undesirable."

The Shaws, along with volunteer Bertha Mireles, made the case for the pit bull and shared their plans for expanding their rescue operation during Thursday's meeting of the Columbus Exchange Club.

"The problem is how they are bred," Kenneth Shaw said. "You see a lot less of the purebred pit bulls today. That's a dangerous situation because when you breed a dog as powerful as a pit bull with any other breed, you are not sure what you are going to get."

The breed's power, athleticism and agility have made it the preferred breed in illegal dog-fighting operations. The result has been a stain on the entire breed, Shaw said.

Shaw said dog-fighting is a big problem in the state.

The Shaws have one dog that was rescued from a dog-fighting operation in Monroe County that was broken up last year. He said Rankin County officials have been in contact with him after breaking up a dog-fighting ring in their county.

"We haven't seen a lot of that in Lowndes County," said Mac Miley, Chief Deputy at the Lowndes County Sheriff's Department. "I wouldn't say it never happens, but it's been pretty rare."

The pit bull's association with dog-fighting has damaged more than the breed's reputation, Mireles noted.

"Most of our rescues we get come in very bad shape," she said. "Our goal is to rescue abandoned, abused and neglected pit bulls and get them healthy and rehabilitated and, hopefully, adopted."

Karen Johnwick, director of the Columbus Lowndes Humane Society, said pit bulls present a special challenge for her and her staff.

"They can be difficult to adopt out," Johnwick said. "Unfortunately, people don't know enough about the breed in this area. They associate the breed with dog-fighting. But it's not the breed, necessarily. It's how people treat the breed. We've seen some pit bulls that are very sweet dogs and would be good family pets.

"We do see a lot come through here," she added. "Unfortunately, there are a good amount of them who have not been treated very well. They have been abused and mistreated and are so badly damaged that we can't adopt them out. It's a sad situation, all around."

The Shaws are in the planning stage of a move to a six-acre site on Old New Hope Road, which will allow them to expand their rescue efforts, not only for the dogs but for pot-bellied pigs. Statistics show that 90 percent of pigs purchased as pets are ultimately surrendered.

"People are told that there are tea-cup or miniature pigs, but there is no such thing as that," she said. "They are pigs, and like any other pig these pigs sold as tea-cup pigs will grow to be 200 to 300 pounds as adults. Any pig that remains small is because it hasn't been fed enough. That's abuse."

To expand their operations, the Shaws need help on a variety of fronts, from funds to build kennels, buildings and buy dog food to volunteers to work with the animals.

"We're committed to what we are doing," Shaw said. "We're hoping the community will help us and there are a lot of ways to do that."

For more information on the rescue, go to http://www.shawpbr.org.

Slim Smith is a columnist and feature writer for The Dispatch. His email address is ssmith@cdispatch.com.